"It's funny how the colors of the real world only seem really real when you viddy them on the screen."

The Skin I Live In 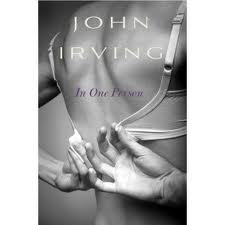 I spent a week camping and reading John Irving's In One Person on the beach (carefully because it's a library book).  Then, after getting home and shaking the sand from all our things, I relaxed with a Netflix movie:  The Skin I Live In (La piel que habito), which was by chance of a similar subject matter.  I recommend skipping the book and going straight for the movie.  SPOILERS galore below - for both.

I don't read many novels, but I sometimes love John Irving.  I find he's hit and miss, able to entice me with Widow for One Year, Cider House Rules, Hotel New Hampshire, Garp, and Owen Meany, but repel me with pretty much everything else he writes.  Many of his books repeat similar events or circumstances, but this one feels more like a rehashing of the other books.  There's lots of wrestling in this one, bunch o' incest and awkward sex scenes, and yet another boarding school that becomes co-ed during the main character's meander through his long, detailed life.  The big spoiler:  pretty much everyone's gay, and they almost all die from AIDS.  We should all learn to accept one another for who we really are - and that can change over time.  I wasn't surprised about anything or anyone.  And worse, the dialogue is so heavy handed I started skimming it early on.  One character alludes to a situation, but then another spells it out for us in case we're completely daft.  And even worse than that, I didn't care about anyone.  At all.  Just get over yourselves already!

What the book does do, however, is make me want to re-read some Ibsen, Hardy, Tennessee Williams, and Shakespeare.  As the main family in the book is heavily involved in putting on plays at the local community theatre, Irving's characters explain each play to death as if the novel is a surreptitious means to educate the youth of today in quality literature.  That might work if any teenagers read it - and get more than halfway through.

The feelings and attitudes of the LGBTQ scene are old hat to me.  That a man might enjoy dressing as a woman yet he isn't gay, the reality of bi-sexuality, and the necessity of transgendered acceptance as their revealed identity are not at all revelatory at this point in our culture evolution - but maybe that's just because I live in Canada where we've had legal gay marriage nationally for seven years.  That a ton of people in the US died of AIDS in the 80s has been explored in better books that leave you dripping with tears.  As someone who grew up with severe speech impediments, that entire sub-plot rang false (and boring).  There was just nothing new or captivating in the book,...which brings me to the film.


Like many Almodovar films, this is weird.  It's truly original.  It's sometimes disturbing and harsh, but the actions of the characters all make sense.  It centres around a plastic surgeon whose wife was severely burned in a fiery car accident with her lover (his brother of course), so he focuses his brilliance on inventing a new kind of skin that's impervious to burns.  But the genetic manipulation necessary to create it is illegal to try with humans.  Luckily, our mad scientist, Robert, depraved to begin with, is going through a crisis: Even though his wife was saved, she kills herself when she sees her hideous reflection.  Then his daughter, on meds after watching her mom jump out a window, is sort of raped at a party.  When his daughter kills herself too, he goes after the rapist.  He traps him for six years, and in that time, he turns the guy, Vincent, into a woman, Vera, complete with his daughter's face and this new crazy skin he's been dying to try on a human being.  Of course Robert falls in love with Vera - a living embodiment of his own daughter.  Creepy!

We don't know until the end if Vera is succumbing to Stockholm Syndrome or is very cleverly trying to gain her freedom as she slowly accepts wearing dresses and as she seems to fall in love with Robert.  The film is thought-provoking as it explores how our outer layer affects everything else.  To what extent does a suddenly disfigured face affect our identity?  Can I still be me if I look totally different?  People will react to me differently.  Even just aging has changed the way people react to me, and in turn, how I interact with people.  I lost the power that comes with being a cute female a couple of decades ago.  And further, to what extent could I be myself if I woke up to find a mad scientist had changed me into a guy.  Would I walk and talk differently?  Would I use different words and phrases?  And, if I did, would I be acting like a guy, or would I be being a guy?  Do I act like a woman now?

There's a brief scene in which Vera sees a picture of her old self, Vincent, and she kisses the photo tenderly.  We often just have to accept what we are today even when it's not what we want to be.  Two hours or 425 pages - take your pick.

I wonder about that.

Email ThisBlogThis!Share to TwitterShare to FacebookShare to Pinterest
Labels: Eclectic, LGBTQ, Pedro Almodovar, Skin I Live In (The) - A, Spain, Thriller

I rate films based entirely on how entertained I was personally, on the resulting effect, not on what was being attempted by the filmmakers. I give an "A" to any movie if I think you should stop what you're doing right this minute and watch this film; it will affect your life. A "B" goes to any movie that was cute or interesting or important but didn't entirely blow me away. A "C" means the film was irritating to me; I checked my watch once or twice during the film. A "D" means I'd rather put a fork in my eye than watch this tripe again; I can't wait for it to end. IF A LINK FAILS, because sometimes they do, search for the film in the search bar (top left).

Marie Snyder
I write here to keep my thoughts from falling out of my head. And I summarize things to keep from accidentally revisiting them over and over and never noticing. It saves time in the long run. - Marie Snyder, Waterloo, Ontario, Canada, the Earth, the Universe