"It's funny how the colors of the real world only seem really real when you viddy them on the screen."

Margaret Wente, in her latest discourse, thinks the reason the environment's being ignored is because of all the pessimists making us too depressed about it all.  She splits all environmentalists into two camps:

"But the biggest divide is really between the purists and the pragmatists, the pessimists and the optimists - between the McKibbernists, who believe we're on the brink of global catastrophe, and those who think human beings are more resourceful and the Earth is more resilient than the doom-mongers say they are."

Because it is.  Every environmentalist I know wavers between the two fronts or else the pessimists would just kill themselves or stay drunk all the time, and the optimists would stop fighting to be heard - AND, if optimists really believe it'll all come out in the wash, they wouldn't worry about how to frame their arguments to avoid shutting people off by being too depressing.  Follow?

This is all a lead-in to the new Rob Stewart film:  Revolution.  He walks that line all the way.  He clearly believes we're on the brink of catastrophe, but also that human beings are resourceful - that we will actually get our shit together in this generation.

Bad news first.  As a film, it doesn't quite work.  It's telling that opening weekend, it was playing everywhere, and the following weekend, even with the promise of a tree planted for every audience member, it was down to one theatre at the outskirts of town.  And I sat in that theatre with six other people.  Like with Sharkwater (which I was privileged to see when he was there answering questions), he struggles to tell a compelling story.  He's got amazing visuals and an incredible series of events to discuss, but he's not a storyteller.  Compare Sharkwater to The Cove to see the difference a compelling story arc makes.  Connected events listed in a row with some swelling music at the end, does not a story make.  Revolution is a really short film, yet I checked my watch at the 45 minute mark, shocked that there was so much left to sit through.  And I'm in the choir!

Now the good news.  All that aside, as a call to arms, it's genius.  My squirmy 8-year-old asked if we could leave early, not just because she was getting restless, but because she wanted to go home to make posters to tell other people.  She got the message in the first half and was inspired to act on it.  Right now!  She didn't want to be beaten over the head with more of the same.  For the inspirational aspect, I'll still give it a B+ and tell people it's a must see.

1. Things are really, really, really bad.  - By 2048, we'll be fished out (which of course always makes me think of this video, harkening me back to grade 9).  But even if we stop the fishing industry on a dime, today, the whole lesson of the film is that carbon dioxide from the burning of fossil fuels is destroying the pH balance of the oceans to the extent that all life on earth could be destroyed.  You heard me.  All of it.  Is that catastrophic enough for you Margaret?

The oceans have died before.  If I got my numbers right, it was 65 million years ago, but it only took 4 million years for them to rebuild.  So that's something.  The coral is dying dramatically right now and could all be gone in twenty years, and phytoplankton in the ocean has seen a 40% decline in the past 50 years.  The oceans create half the oxygen in our atmosphere, so no ocean means not enough oxygen for us mammals out here on the ground, out cutting down trees like there's no tomorrow.  Because, hahaha, there isn't!  Not at this rate.  We're hilarious!

2. Canada particularly sucks.  - Once again, preaching to the choir.  It's shocking how far we've come over the decades, how high up we once were when it came to environmental legislation, only to lose all that ground with one monstrously short-sighted business-centric Prime Minister.  Yikes.  We've won "fossil awards", for the worst country for fossil fuel use, voted on by 400 environmental organizations, for the last five years.  We've been named, officially, the colossol fossil!  The biggest problem?  The tar sands.  According to too many people to name, the mess should be shut down right now, and all that oil left in the ground, but Harper wants to make it TWENTY TIMES BIGGER!  Because, you know, bigger is always better.  Think he's maybe compensating for something?

3. "If people knew the truth, they'd do something."  - I talk about this in class all the time.  It seems like it would be true, but I know tons about horrific slavery in the Ivory Coast, yet I still sometimes get lazy and buy non-fair trade chocolate.  Even though I know the truth, and teach the truth, I sometimes forget how important it is to act on it.  And I sometimes get depressed and decide my part doesn't matter since so few people really care.  Like Marky Mark says in I (Heart) Huckabees:  "I can stop using petroleum, but there's no way I could stop its use in my lifetime."  It's a dilemma.

But what does help is constant reminders.  We need films like this to wake us up over and over.  Like racism and homophobia, we stop talking about it because we think it's getting better, then we get a backlash.  These things have to stay on the front, solar-powered burner forever.  So really, it's not just about telling the truth, it's reminding people of it in different ways all the freakin' time.  BUT the corporations own the media, and I'm not convinced they'll be on board with our little scheme, so this could be a costly affair, EXCEPT, we've got that most anarchist of media on our side (so far in our land of the free): twitter and facebook.  Go nuts!

4.  Finally, the kids will save the day.  - Once we get money and a nice home, we get complacent.  Stewart doesn't say that, but I think that's part of the problem.  Kids see the long term because they haven't settled yet.  They're still in flux sufficiently to become impassioned about their future.  We codgers think we're all safe and cosy, so what's all the fuss?  The youth of today (and many old folk thank you very much) are taking to the streets already, protesting over and over until they're in tears for the frustration of not being heard.  There are some small successes here and there, and that can keep us going.  Someone said, "We thought we had to save the polar bear, but now we know we have to save our future."  Kids want this to change so they can flourish.  They don't have a car, so they don't worry about their hummer being taken away.  They're not there yet.  They're still willing to go without so we can all live.  We have to stop using fossil fuels dramatically, and we have to protect wilderness.  Go! 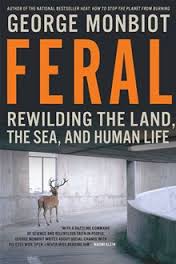 George Monbiot has a new book being release soon.  One reviewer sums it up,


As a species, he argues, we’ve made enough calamitous mistakes to learn from, and gathered enough experience and evidence down the ages to draw a new and challenging conclusion: huge swathes of wild places, on land and sea, teeming with life that is largely outside our influence, are necessary not just for the diversity of life on earth, but for the spiritual nourishment, perhaps even the social stability, of mankind. And we can create such magical, life-affirming places with a radical new environmental management plan: leaving them alone.


The way I see it, we have to stop acting like a virus eating our way through everything we see.  We have to reclaim what it means to be part of humanity: to use our big brains to cooperate sustainably  instead of competing and growing exponentially.  It's suggested in the film with the story of the cycle of lynx and hares.  Every 14 years the lynx population declines because they ate too many hares, then the hares populate again, and then the lynx flourish again.  I've witnessed the same with the fox and mice populations up north.  But people don't do that in quite the same way.  We build empires that are too big, then they collapse horribly, and another one begins.  But now that our empire is global, there might not be another ever after.

I'm so thrilled that Rob Stewart made this movie and that his films are so inspirational to so many people.  I hope he continues to run this circuit.  He's an amazing cinematographer.  But maybe he should think about hiring a writer - and maybe even a better narrator.  We can't all be good at everything.  And this is too important not to be the very best it can be to get beyond the congregation and into the streets.

I mentioned to a friend recently that I've told my children not to have any children - not because children aren't a joy.  They are.  And not because of overpopulation which is a story for another day.  But because there's nothing worse than watching your children suffer.  I'm on Wente's doom-monger side when I say that I believe that if my children have kids, they will watch them suffer a fate nobody should have to endure as we cope with the heat, endless drought, and oxygen-shortage.  My friend laughed, "Of course it will all work out somehow."

Of course it will. 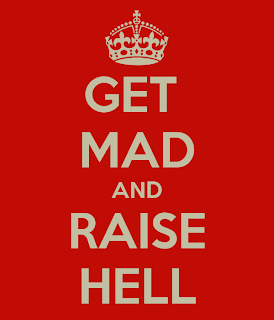 Email ThisBlogThis!Share to TwitterShare to FacebookShare to Pinterest
Labels: Cove (The) - A, Documentary, Revolution B, Rob Stewart, Sharkwater - B

I rate films based entirely on how entertained I was personally, on the resulting effect, not on what was being attempted by the filmmakers. I give an "A" to any movie if I think you should stop what you're doing right this minute and watch this film; it will affect your life. A "B" goes to any movie that was cute or interesting or important but didn't entirely blow me away. A "C" means the film was irritating to me; I checked my watch once or twice during the film. A "D" means I'd rather put a fork in my eye than watch this tripe again; I can't wait for it to end. IF A LINK FAILS, because sometimes they do, search for the film in the search bar (top left).

Marie Snyder
I write here to keep my thoughts from falling out of my head. And I summarize things to keep from accidentally revisiting them over and over and never noticing. It saves time in the long run. - Marie Snyder, Waterloo, Ontario, Canada, the Earth, the Universe